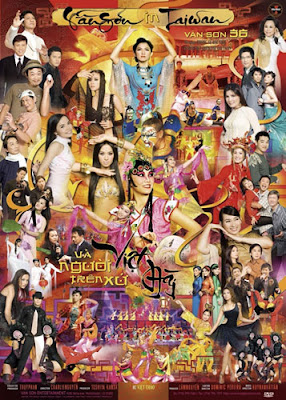 It took me a long to do a review on Van Son 36 in Taiwan because I didn’t get to watch all of the video. Well after I watched the whole thing, I was very touch by it and I recommend Van Son 36, especially the documentary part because it’s important for many people to see the hardship of Vietnamese brides, workers, and maids in Taiwan. Many of us often take advantage of what we have in front us, while others have nothing. The people who attended Van Son 36 show was very excited that it shows in their eyes and face. It was more than a show to them and meant a lot since they have been living in Taiwan for long without getting to communicate normally or experience the entertainment or simply to have a sort of leisure time. They feel lonely and out of place in Taiwan because it is not their home. I really give credit to Van Son for creating their show in Taiwan because they are bringing joy, happiness and hope to the Vietnamese living there. Also the show was free for those who attended, since the production company couldn’t take their money. Away from the touching part, let’s focus on the entertainment acts, which to me really suck. Aside from the comedy plays and the documentary, just about every other performance was not good.

THE END! Wow, the audience was so energetic and excited to meet the singers.
The documentary with Viet Thao was good and touching. I don’t want to talk too much into the sad stories told by the people there, but you should watch it for yourself and see to become aware of the kind of things that is going on. One of the fun moments was when Viet Thao went to find those insects for medicine making and he was so afraid screaming all the time. In the end he ate of the fried one and it was gross. Also a favorite scene of mine was the food section lol. Viet Thao showed the different kind of food in Taiwan and it looked so good. The documentary was very good. Go watch it!

P.S. I can’t wait to see Van Son in Kingdom of Cambodia!

P.S.S. Without Viet Thao as the host Van Son would be nothing. Seriously. VT is the bomb!
Taiwan Van Son 36

Anonymous said…
What valid evidence do you have that Nguyen Khang is Tuan Ngoc's son? I don't think they are related in any way, but do you have any proof?
3:57 PM

Karly said…
Sorry for about the misleading info. They are not related. Nguyen Khang just looks like to Tuan Ngoc and imitate his style.
4:19 PM

Anonymous said…
I was interested in buying Van Son 36 not too long ago until I read your review. First of all, I apologize for any rude comments. Please excuse me if I offended you in any way. It is not done out of bad intentions; I'm just trying to be honest.
When someone is thinking of buying, say, Van son 36, they want to know about the singing, acting, overall performances, music, stage presentation, & the audiences. You did just a little bit of that. However you fast forward too much! lol. Slow down alittle & give yourself a chance to notice the detail parts. Whether good or bad, we consumers wanted to hear about their overall performances before buying the dvds. So a good knowledge of the dvd is needed for a good review. I don't think we would be interested to know this chick looks hot, this guy got too much plastic surgery..he did this to her...and so so on. Please don't talk about their looks or personal stories. we could always leave this up to the audience for their own judgements.
2:25 AM

Karly said…
thanks. i understand. im sorry that my review is not good quality. -_-' i do not recommend my reviews for those serious about what you said singing, stage, etc. the things i mentioned are the stuff im interested in and i find it funny or whatever.

if you are looking to buy a quality dvd i recommend thuy nga or asia over van son because van son for once isnt good. you get people like ngo thanh van and andy quach, cat tien etc that are there to lure the young audiences and fans. the other singers veteran like truong vu are always good. van son is fun to watch and their theme and traveling thing is good. but in term of stage set up, singing abillity, informative show, i would definitely recommend thuy nga and asia. asia for the war and old school songs.
3:06 PM

Karly said…
one more thing, you should definitely not buy vs 36 this one isnt good at all but the documentary is great though.
3:07 PM

Anonymous said…
Yeah, Nguyen Khang is not Tun Ngoc sons. They do sing alike. I know a fe people who lived in NK neighborhood and I'm sure if TV was NK dad's they would have mentinoed it to me already.

I thought VD 36 was good simply because it's consistence. It's not a must buy or anything but I would take time to watch it if I get a copy of it. However, I did buy this one out of boredom.

Karly, you could review the DVD, then compare it to some other DVD by that company so people may have a reference to compare to.
10:52 AM