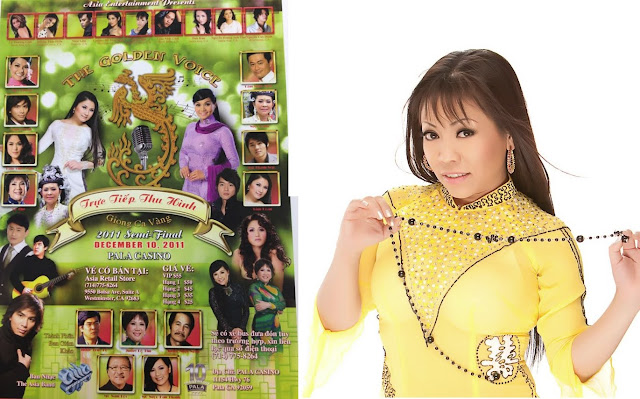 One of the contestants from Giong Ca Vang 2011, Bich Thao is going to news media claiming that the show was unfair to her as well as other contestants. In the video interview below she said the show was biased and gave special treatments toward contestants Nguyen Hoang Anh Thu (1st place winner), Thuong Linh and Lindsey Do Tien Dung (3rd place winner). Bich Thao said that Thuong Linh, Anh Thu and Tien Dung have connections. Lindsey Do Tien Dung for example is a TV host at SBTN. Anh Thu is Viet Dung's "student." On the show Thuong Linh was able to sing live with the band while others sang karaoke style. Bich Thao complained that she was not in the finals even though she has good reviews from judges as well as a good voice since she studied in musical school in Vietnam. On the other hand, contestant Lindsey Do Tien Dung was chosen for the finals. Bich Thao said Lindsey's voice was weak and did not deserve to be in the finals over her. In additional to the complaints about biases, she talked about the $100 fee to enter the contest and that money was not refunded to the contestants if they win or not. "It would nice if an email was sent to those who were not chosen so that they would know," she said. Instead those who didn't make it wait and wait not knowing. Bich Thao had to spend money out of her pocket to buy Asia's karaoke DVDs for her performance because singers were forced to sing from pre-recorded music instead of with a live band. Lastly, when she had asked Dang The Luan to speak with the producers to help edit a song for her, the answer was no. So she had to put more out from her pocket to fix a song that Asia could have easily done. Overall, she commented that Dang The Luan was not nice about the whole situation. Bich Thao is not happy with the show as well as the results and believes her voice is better than those who had won. The reason she's speaking to media sources is because she was threaten to keep her mouth shut by Anh Thu's boyfriend Phong. Phong said that Bich Thao no needs to apply for Thuy Nga because she won't make it because Phong works there. Watch the videos, including those of the contestants she claims to not sing well; let me know what you think. Does she have a case or is she just bitter?

For more video interview with Bich Thao and contestant Dan Kim, visit PhoBolsaTV on Youtube and scroll down on their video list.

Anonymous said…
What is fair in this world? Nothing . I'm sorry to hear - Asia entertainment used to be good but it s not any more -everything is cheap dirty ,small stage by watching their DVD;cheating from older generations , reuse their musics so many times,hmm so may bad things to mention .
12:43 AM

Anonymous said…
Usually I do not comment on any of these things but I honestly cannot stand this singer. She talks like she is the ban giám khảo. Nói chuyện chảnh & phách quá. She seems very uneducated and upset because she didn't get the award. She thinks that she is better than everyone else and is very unprofessional. "Nói thẳng ra là không bằng em..." Wow...
3:07 AM

Anonymous said…
She's just jealous that the three winners are actually better singers and have a stronger voice than herself.
10:43 AM

Anonymous said…
The contest weren't only determined just the voice but also performance and looks. I think that is the reason why Lindsey had chance to made that far cause obviously she has full packages comparing to Bich Thao and Thuong Linh.
4:08 PM

Anonymous said…
that's showbiz.... it's ugly and full of ass kissing, unfairness, and so on so forth. bich thao might have a case but she's not gonna have a platform to work in the u.s., not in cali because they're gonna boycott her or do "things" to prevent her from getting or doing work. good luck bich thao.
7:25 PM

Công Lý said…
She's just jealous since she couldn't make it far into the contest. If she is as good as she think she is, why not enter the upcoming talent search held by Thuy Nga and see how she does? In her introduction during the first round, she praised how much she idolized Asia and Dang The Luan. After the contest, she turned around and backstabbed them. If she thought something was not right, why didn't she speak up during the contest?!? It's not just a singing competition. It's a talent search for the next star. If you watch how Lam Nhat Tien and Lam Thuy Van started out years ago, you wouldn't think they could sing. But look at where they are now. Obviously Asia knows how to groom talent and develop potentials that not many people recognize at first. Do Tien Dung might be this case now. It's their business, let they decide what's best for them. No need to put down this girl.
10:16 PM

Anonymous said…
In the interview before performing Chieu Tay Do, Bich Thao lied about watching Dang The Luan getting 1st place in 2005 Giong Ca Vang while she was still in Vietnam and how that inspired her. In 2005, there was no recording or broadcast for this competition and they certainly didn't broadcast to Vietnam. You couldn't find a video clip of what Bich Thao referred to on Youtube. How could we trust anything she said?
10:43 PM

American Dream said…
forget what she had said for a moment and listen to all contestants. I am sure we agree that BT should be somewhere in the top 3. The show is a marketing tool and is always and will be bias. Obviously, BT is unhappy and need attention, but going to the public may not be the best approach. On the other hand, if BT did not speak up who will. I think we all should support BT for speaking out as fan of Vietnamese music and as a citizen. We all should speak up for any unjust. Come on people, give BT a break and support her.
3:09 PM

Anonymous said…
Fair or not, beauty is in the eye of the beholder. I think Asia did a good job picking the top 3.
Looking back at the 3 winners, they have all been very successful with their singing career. Lindsey and Phi Tien for sure are out there doing their thing. Proud of them.
5:49 PM